The Psychology of Money 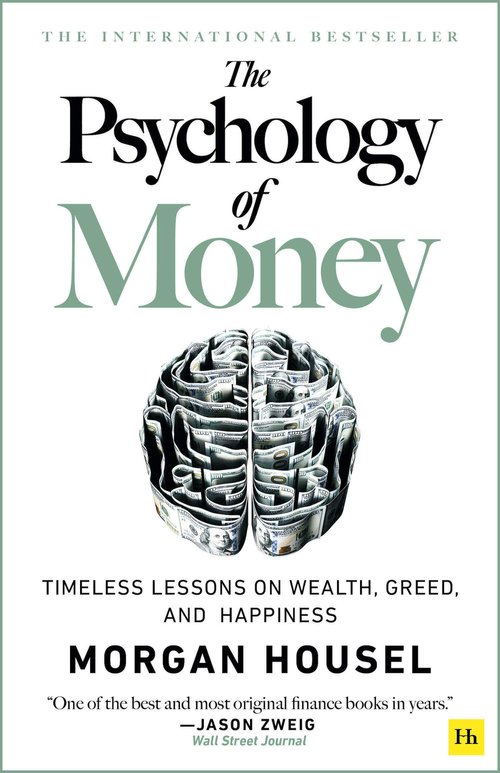 How should investors manage the inevitabilities of risk? What are the most powerful wealth-building tools that require little technical skill? How do our brains hold us back from a more prosperous future?

In The Psychology of Money, investor and finance journalist Morgan Housel answers these questions and shares how human thought, habits, and emotions are intertwined with investment. He shares insights and strategies for how investors can leverage these connections for personal gain — not only financial but personal and emotional as well.

Morgan Housel is a partner at the Collaborative Fund and a former columnist at The Wall Street Journal and The Motley Fool. His work has been focused on the exploration of how investors deal with risk and how to handle it in more productive ways.

During the 1800s, scientists came to the consensus that the Earth had experienced a number of ice ages in which large parts of the planet had been covered in ice sheets. During the last glacial maximum, the location of what is now Boston had more than a full kilometer of ice above it. Toronto had two kilometers. Montréal had more than three. The southernmost edges of the North American ice sheet were in northern Kentucky and West Virginia.

It was unknown, however, what caused these ice sheets to form. Each theory could explain one or two instances, but not all of them. That is, until Russian meteorologist Wladimir Köppen made an unexpected discovery. The cause, Köppen discovered, was not especially cold winters but slightly colder summers.

Each winter, snow would be left behind, but the slightly colder summer meant that a small amount of it would survive to the next. Over time, more and more snow piled on top of what had survived in years before and covered more and more of the ground in permanent snow. Each summer, the leftover snow would increase the chances of more remaining, and the new snow cover would reflect more sunlight, cooling the ground and causing more to remain the following year. Eventually, this became ice sheets thousands of meters thick.

It feels counterintuitive that such small change can have such massive results, but it is the same operating principle behind compounding returns. If something, like ice or money, compounds and a little bit of progress builds more progress, that small progress can have tremendous results. The number one rule of investing is that you don't need massive returns. You need on average ok returns that can compound for long periods.

In 1936 Heinz Berggruen fled Nazi Germany. In his new life in America, he would become an art dealer until, in 2000, he sold the core of his massive collection to the German government. This sale, which would go on to make up the core of the Berggruen Museum in Berlin, included 85 works by Picasso and 80 other pieces of art by artists like Klee, Braque, Matisse, and Giacometti. The 165 pieces were valued at over $1 billion.

How did Berggruen acquire such an impressive collection of famous masterpieces? Luck? Skill? Horizon Research wrote that the secret was that Berggruen bought and sold thousands of pieces of art throughout his career. Most of them were probably of little value, but if a tiny percentage of those thousands turn out to be Picassos and Matisses, they can make up for all the ones that weren't. Most of Berggruen's investments could be bad, but he made enough of them that it didn't matter.

The reality is most companies and most investments lose money or break even, but a few are big winners. Those big winners are the ones that create value. In 2018 Amazon single-handedly drove 6% of the S&P 500's returns, and Apple drove another 7%. If you owned an S&P 500 index fund in that year, almost 1/7th of your returns came from just two companies. If the number one rule of investing is compounding returns, then the number two rule has to be those tail events create the returns that get compounded.

Good investors will cast a sufficiently large net that they are sure to have some tails in it. They won't panic at one bad year, one bad earnings report, or one lousy product and sell before they have a chance to find those magic returns. They'll accept that most of their decisions will not be big winners but that if they make enough, they'll find ones that are.

There has never been a battle larger than that for the city of Stalingrad during World War II. Having lasted almost half a year, that single battle saw more casualties than the total military dead of the United States, Great Britain, Italy, France, and Yugoslavia combined. In 1942 a unit of 104 German tanks was outside of the city in reserve. But when it was needed most, its officers were shocked to discover that only twenty of their tanks were operational.

Engineers investigated and soon discovered that during the weeks the tanks spent unused, outside the city to be called upon, field mice had nested inside of them and eaten the wires and insulation of the electrical systems the tanks needed to run their engines.

These tanks were not poorly designed. Many have made the argument that German armored units were so well engineered that they were impractically expensive. But no engineer would think to plan for a 20-gram field mouse to disable a 25-ton steel machine. It wasn't the engineer's responsibility to plan for freak events like field mice. It was the commander's responsibility to plan that they may not be able to use those tanks for some reason.

Freak events happen all the time. Things that have never happened before happen all the time. Even when someone thinks that they have planned for every possibility, they haven't. That's why it's so essential that margin for error is built into every plan and strategy. Investors always need to account for the ever-present reality of risk in their investments. They should never bet everything on a single strategy. They should always maintain a reserve in case their investments go wrong. They should always be aware that the returns they expect may never materialize. Loss will always come eventually, risk will always appear. The job of a competent investor is to make sure that when that happens, it is not catastrophic.

Margin for error is pretty hard to achieve without savings. Savings are a margin of error in a way, and building margin of error into a strategy – at least in investing – usually requires extra money (read: savings). Past a certain level of income, people fall into three groups.

First, wealth has more to do with your savings rate than your income and investments. Wealth is accumulated money. You need to save to get that. Secondly, the value of wealth is relative to what you need. It's a lot easier to use money more efficiently than find new sources of money. Thirdly, past a certain level of income, what you need is just what sits below your ego. Once comfortable basics are covered, everything after that is a want, and often those wants treat the display of money as more important than having money.

Fourth, people's ability to save is more in their control than they might think. You can spend less if you desire less, and you can desire less if you don't care what others think. Fifth, there's no need to have a specific reason to save. Something that's going to need money is seldom going to be anticipated. Sixth, flexibility and control over your time is an unseen return on wealth. Savings give the ability to control your own time. Lastly, that return is more and more important. Being able to be flexible and control time makes it easier to compete in an increasingly competitive market.

If someone wants a $30,000 car, they have three options. They can pay for it, they can find a different car, or they can steal it. Most people would not opt for the third option. They know that if they steal that car, it's not really free. It's just a different price. Investment returns are not free either. They all come with some kind of price.

Like the car, investors have three options. They can either A) accept this volatility as the price of those returns, B) accept lower returns with less volatility, or C) try to game the system and get those returns without the volatility. Like with the car, some car thieves will get away, many of them will not.

In 2008 GE, one of the biggest companies in the world, almost collapsed. Their stock price went from $40 in 2007 to only $7 by 2018. One of the problems was that under their CEO, Jack Welch, their extremely lucrative financing division would always beat Wall Street estimates. They'd always return higher, no matter what. They gamed the system, massaged numbers, pulled returns from future quarters to current quarters.

But that caught up with them, and when the stock market collapsed, so did their game. Volatility, risk, and uncertainty are a part of investing. They have to be accepted because they will always appear, and to think they can be avoided, often just exacerbates their effects.