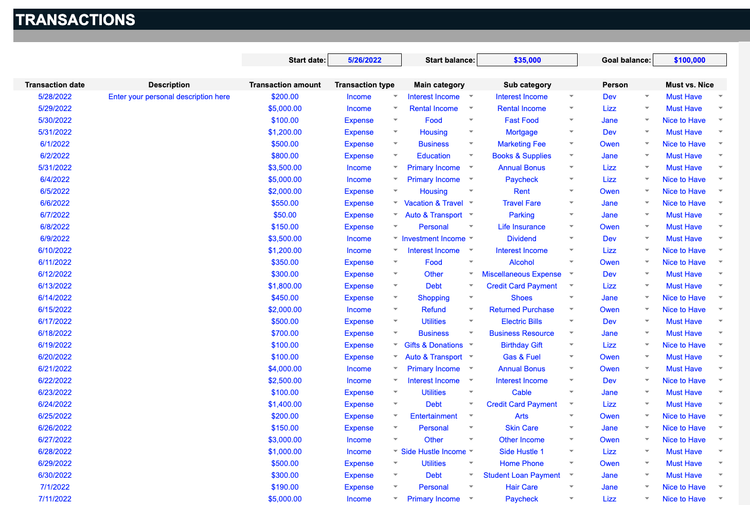 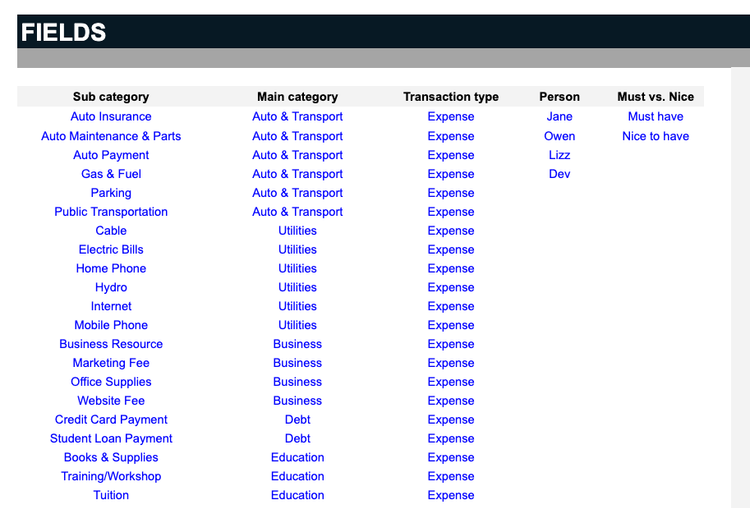 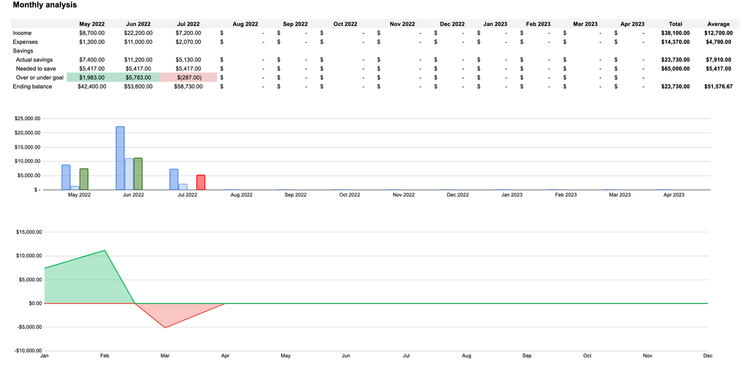 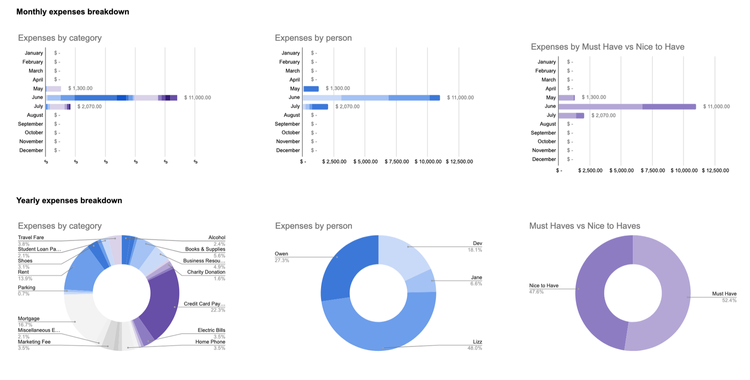 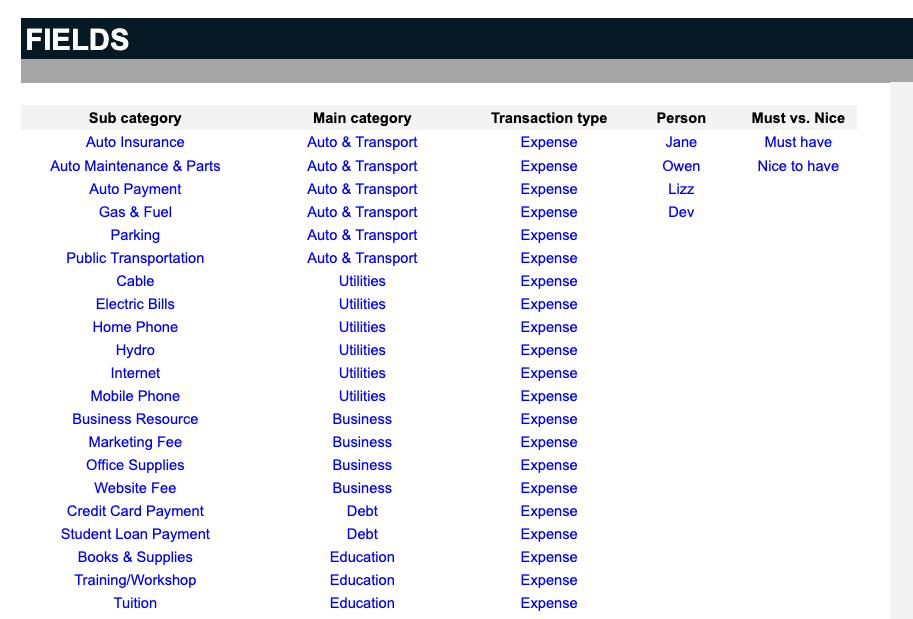 Need a budget the whole family can stick to? Use the fully customizable Family Budget Planner spreadsheet to set an annual savings goal and track a full year's transactions against it. A summary dashboard determines if spending habits are on track or off track year-to-date (and by how much) to meet the annual goal. A monthly time series tracks net savings against planned savings month by month. And pie charts track expenses by categories, family members, and "nice to have" or "must have." With all the tools to assess spending month by month, the whole family can learn how to budget according to a plan and reach it.

Below, we detail why you really want to share the skill of budgeting with your family, but if you want to skip straight to the tool explainer, do so now.

How did the richest family in the world go bankrupt?

Two words: no budget. Cornelius "Commodore" Vanderbilt borrowed $100 dollars from his mom in 1810, which would be roughly equivalent to $2,400 today. With it, he built a steamship and railway empire that grew into a $100 million dollar fortune by 1877, making him one of America's richest men with a net worth of over $200 billion in today's terms. Six generations later, his family lost it all. Below, we explain how the Vanderbilts became the wealthiest family in the US, how they overspent their millions over six generations, and how your family can avoid the same fate with a budget planner we created to get started. If you want to go straight to the spreadsheet tool, skip to the explainer section below.

A dutch immigrant with a frugal upbringing, Commodore learned to save any and all disposable income from limited means. Commodore's mom Phebe would even charge interest when she lent out her silver to turn a profit. Remember that $100 dollar loan? "Commodore" used that first check to buy a boat from his own parents, then turned it into a business ferrying freight and passengers from Manhattan and Staten Island.

He was so successful that by 1817, he earned a government contract to ferry military supplies through New York Harbor in 1812. Commodore would use competitive pricing to undercut rivals so low they had to give in or buy him out. He then saved the cash and would lend it out to earn interest or invest in hard capital like more boats or real estate. Between the 1820s and 1850s, he built his own steamboat fleet, built his own ships, and even built his own canal to ferry passengers and mail from New York to California during the gold rush. This was all with an eye on cost. A former clerk said, "He never had a debt and never bought anything on credit. He was economical almost to extremes." This quote definitely came back to haunt him generations later.

By 1964, Commodore swapped his captain's hat for a conductor's hat and acquired controlling stakes in two New York-based railroads. By 1967, he had control of all the railroads between New York and Buffalo. At its peak, his company New York Central was the second-largest railroad in the US, with 11,000 miles of track across 11 states and two provinces in Canada. When Commodore died in 1877, he reportedly had $100 million dollars in the bank, which was more than the entire US treasury and would be worth $233 billion dollars today. We're talking Bezos-and-Musk-level rich.

The Vanderbilt's budgetary strategy was: frugal spending, so income was always higher than expenses, and savings were invested in making more income or saved as cold hard cash. You could say Commodore was the ultimate family budgeter, as he left only half a million to each of his heirs… except one. William "Billy' Vanderbilt inherited the bulk of the estate at $95 million. Commodore warned Billy, "Any fool can make a fortune - it takes a man of brains to hold onto it." Billy took this advice seriously and doubled the family fortune to over $200 million thanks to his 87% controlling share of New York Central. By the time he passed, this share was split and divided up between two sons. The first, Cornellius "2", died managing the railroad after only seven years. The second, William "2", took over and decided to retire early. This is where the fortune went off the railroad tracks… pun intended.

William Vanderbilt spent money on yachts, thoroughbred horses, an expansive art collection, and ten mansions on Manhatten's fifth avenue. There was also a one hundred and forty-six-acre estate built by another Vanderbilt brother, a summer home in Rhode Island, and then the philanthropy. William gave hundreds of thousands of dollars to the YMCA, Columbia University, his own "Vanderbilt University" and "Vanderbilt Clinic" and gave a million dollars to tenement houses in New York. The Vanderbilt's net savings reached zero dollars gained by the end of William's reign, leaving the fortune stagnant at $200 million dollars. As William said, "Inherited wealth is a real handicap to happiness."

But they still had $200 million, right? Next came brothers "Reggie" Vanderbilt, who was the grandfather of CNN Anchor Anderson Cooper, and "Neily" Vanderbilt, who was not the grandfather of iconic rapper Nelly. Both brothers spent a ton to maintain the high society lifestyle of the roaring 20s, and this dwindling supply was dispersed between even more descendants throughout the early 1900s. This all happened right as railroads were becoming a less important transportation source - meaning less income coming in. The family tried to make up this lost income by selling shares of New York Central to other railroads. After two failed mergers, that only created a bigger failing company. The family business finally declared bankruptcy in 1970 and a year later, was completely taken over by federally-controlled Amtrak. And today? As Commodore's Great great great grandchild Anderson Cooper said in 2014: "...There's no trust fund."

Through multiple generations, the Vanderbilt family failed to pass on the tactical budgeting strategies that earned them their original wealth. To avoid the same fate for your family, you can use the Family Budget Planner spreadsheet we created to track your expenses, set a savings goal, and stick to it. Below, we show you how to use our template to do exactly that. And for more on how psychology and money are intertwined, check out our summary of the book The Psychology of Money by Morgan Housel.

To manage your own budget, you need to know two things: your monthly income and your monthly expenses. With these inputs and outputs, you can easily manage your money. A helpful framework that most money managers recommend is to follow the 50/30/20 rule: 50% of your income should go to your must-haves, aka your needs. 30% should go to your nice-to-haves, also known as your wants. And 20% should go to your savings, whether that's saving for retirement or paying down debt. Our budget planner allows the whole family to track and analyze their finances from month to month and details each transaction by category, who made the transaction, and whether it was a must or nice to have. The dashboard breaks out all these transactions against an annual goal you set to determine if you are on track or off track and by how much.

This transactions tab accounts for each of the transactions from your bank account. Enter the start date of your budgeting, the start balance in your bank account, and the goal balance you plan to achieve in one year. If you have multiple bank accounts with different balances, like a checking and savings account, just add them together for your total start balance. This helps prevent the need to account for transfers between accounts. Then, enter your transactions below. A "Description" column allows you to write personalized notes for greater detail. For example, should you want to count transfers from checkings to savings accounts, you could add them as "income" and then write a note in the Description column explaining it is a transfer.

Our template allows you to input each transaction on your bank account and categorize it by the type of transaction, its expense (or income) category and sub-category, the person who made the transaction, and whether it was a must-have or nice-to-have from the dropdown fields. You may want to edit or add additional values to the template's dropdown fields. Use the Fields tab to adjust the categories to fit your most common expenses or add new ones, like additional family members. You know, in case you want another heir to divide up your fortune once you're "Vanderbilt rich."

Once all your data is entered, go to the summary dashboard to quickly learn if you are on track or off track from your yearly goal. The tracker gauge tells if you are on track or off track to meet your goal year-to-date and by how much. The goal tracker tells you how much is left to save before you reach your goal, and how long it will take. Then, view your month-by-month income and expenses, whether you've met your goal that month, and how much you are over or under.

With the Family Budget Planner, you can also view expenses by category, by person, and by must or nice to have for each month, as well as for the whole year. If you're over budget, these pie charts show you exactly where your money is going, who is responsible, and where you need to cut down so you can budget accordingly.

With the right tools, you can run your family budget like the O.G. Vanderbilts. It's helpful to manage your family's budget like running a business: if you spend more than you take in, you'll go bankrupt. But you also need to generate a profit. As a profitable family, you ensure the adults are set for retirement, and the kids are set for college, moving out on their own, or hoarding until their grandkids squander it.

For more additional hacks to form the "habit" of budgeting, then you may want to check out our book summary on the book Atomic Habits by James Clear.